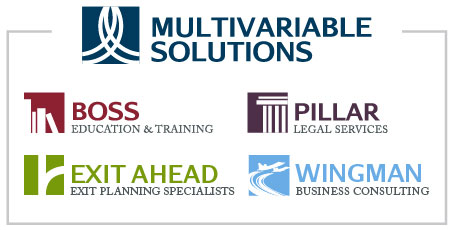 Multivariable Solutions is a collection of talented professionals with a wide range of capability and experience. Many are currently engaged with Fortune 500 companies others with young start-ups. From medical practices to high tech aerospace manufacturing there are backgrounds across the full spectrum of running a business.

‘Multivariable’ thinking becomes critical as you look across all the different facets of running and growing a business. Most companies and consultants focus on one or two variables whereas Multivariable Solutions looks across a wide spectrum. Often starting with development of a Strategic Plan we can stay with the company/owner through execution all the way to the exit plan. Whether it is creating a new image while at the same time positioning for an exit, or doing team education and solidifying the financials you can’t push on one area without it affecting another.

But words and backgrounds are not important if you don’t get the results. Multivariable Solutions is not about advice, it is about results. Our results are proven and measurable; call us today to get your results accomplished.

Together, Chuck and Stacey have nearly five collective decades of entrepreneurial experience. To help you discover the right solutions, Chuck and Stacey ask the right questions. They know who to ask, when to ask, and how to ask—to get you the right answers. As certified hypnotists with strong foundations in neuro-linguistic programming, this duo brings much more to the table than ordinary consulting teams. From start to finish, Stacey and Chuck are expertly equipped to manage every stage of your business. At Multivariable Solutions, the end goal is simple: better results for you and your team.

What can we do for you?